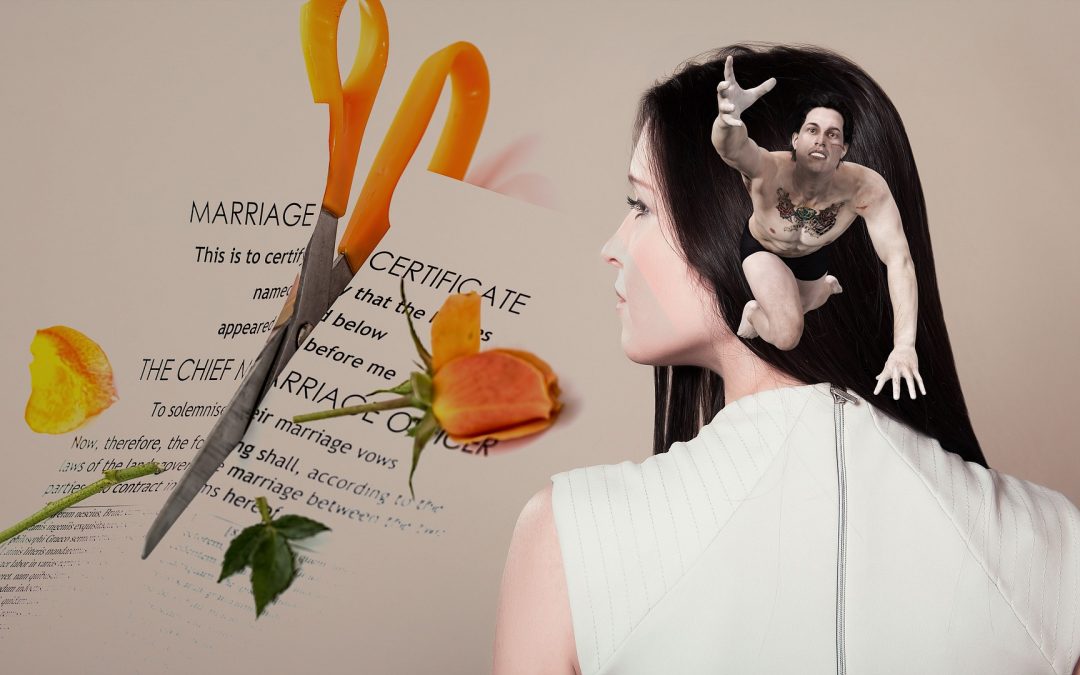 Staying or leaving my marriage – this is one of the most common dilemmas we face. There are plenty more. Some are finer and more detailed, such as choosing between partners, or moving a friendship into the love zone. Making difficult choices around relationships (or many other things), such as staying or leaving, can be helped with hypnotherapy, as a way of tapping into the unconscious feelings around each choice.

The wisdom in your unconscious mind is deep. Essentially, how you feel about something is either going to make you satisfied or unsatisfied, regardless of how much more sensible one option might be over another. If you have a strongly sensible approach in life, then maybe the more sensible choice is going to help you to feel satisfied in the long run. But not necessarily so.

Thinking vs Feeling in Staying or Leaving

Imagine that you have recognised yourself as unhappy, even miserable in your marriage. Perhaps it has been that way for years. For many people, staying would be the more sensible solution, due to money issues, young children, or any number of other factors. Some in this situation might have the opportunity to live separate lives while keeping the marriage, considering it perfectly ‘doable’. They remain largely unaffected by their partner’s quests for intimacy, elsewhere, and the emotional emptiness in their home environment.

But for others, staying would cause misery and even illness through depression, anxiety and related conditions, or perhaps domestic violence. Or to a lesser degree, some may feel that they are missing out on life by staying put in a dead-end relationship, and don’t want to go to their graves filled with regret. There are many variations on this. Some choices are clear, while others are blurred.

It started out 50/50. It could grow into a beautiful chapter of my life, or it could fail. Probably not the best starting point, but that’s history. We’d been dating for five years and it was I who pushed for the marriage, because he was not the type to take bold steps. Probably not the best match, enough said. He was apathetic and passive aggressive. I was communicative and goal oriented. He was happiest alone, I was happiest with a partner. Our values didn’t match. This is why I sensed it had a 50/50 chance but I didn’t fully understand my feelings and the sensory information I received, at the time. In the end we would fight about housework, the drollest of subjects, having exhausted all the big ones, and it was time to go.

For years he told me he was saving towards an overseas trip with me, one of my key goals, while spending everything he earnt on his boat. He lied. In the end he told me he didn’t want to travel with me because he traveled for work. He would complain to his work colleagues behind my back that I never picked him up from the airport, yet never say a word to me about it. His workplace provided him with cab charge vouchers. I felt completely misrepresented. On my birthday one year he took me out to an expensive restaurant for dinner. As we sat, people watching, he pointed to a man at another table and said, “Someone like that would be perfect for you”. Really? And I don’t believe he was intentionally trying to upset me. He was simply oblivious to me, as a part of his world.

We had both decided we didn’t want children yet when it ended he told me that I was not a ‘real’ woman for making this choice. There were countless incidents where his passive aggressive behaviour wore me down. Finally, he tried to cheat me of my share of the money when we sold the house, by lying to me, yet framed it in the opposite way to his friends and colleagues.

That last play was a Godsend however because it allowed me to instantly drop the grief I was feeling over the break-up. He had finally made himself vividly clear, after 11 years of confused, non-committal behaviour.

The above list of warnings represent but a pixel in the big picture – there were so many instances. On an unconscious level I knew this was not a good match from the beginning, yet in other ways we seemed so compatible. We liked similar music, food, lifestyles. We were both interested in topics such as culture and quantum science. It seemed as though we had things in common. But these interests were not the same as deeper values, such as emotional honesty, communication and unity. Our temperaments were seriously at odds with his passive aggressive, nebulous approach towards life, compared to mine. He found me aggressive when I was being direct. He was ‘I’ centred and I was ‘we’ focussed. This meant that I would be the one to make all of the sacrifices, as I had done.

Sometimes the question of staying or leaving becomes ‘difficult’ when the information is confused, as it was in my marriage. I never knew where I was with him. Sometimes he was confused himself, and other time he was simply lying. Working this out took many years – my years. I could have saved those years for better things if I had realised then that I didn’t need to know why, what he’s thinking, what he wants etcetera. I only needed to understand how I felt by his behaviour. And that wasn’t very good.

Analysing the signs and the nuances along the way is not as important as understanding how those signs and nuances make you feel, despite the other person’s intention, level of personal uncertainty, or anything else. That’s because if there is a genuine misunderstanding or uncharacteristic episode causing the upset, that negative behaviour/impact will not be consistent. And if it is just their temperament at odds with yours, affecting how things come across, then that’s pretty hard to change, so it’s probably not worth the trouble. But that is my opinion – yours may differ.

Advice to a Younger Self

In making difficult choices such as this one, staying or leaving the marriage, I would have used the following technique

If you need assistance in making difficult choices, whether in your marriage, between jobs or anything else, I can help you to find out which path will make you happiest.