How ‘WHY’ is a useless question 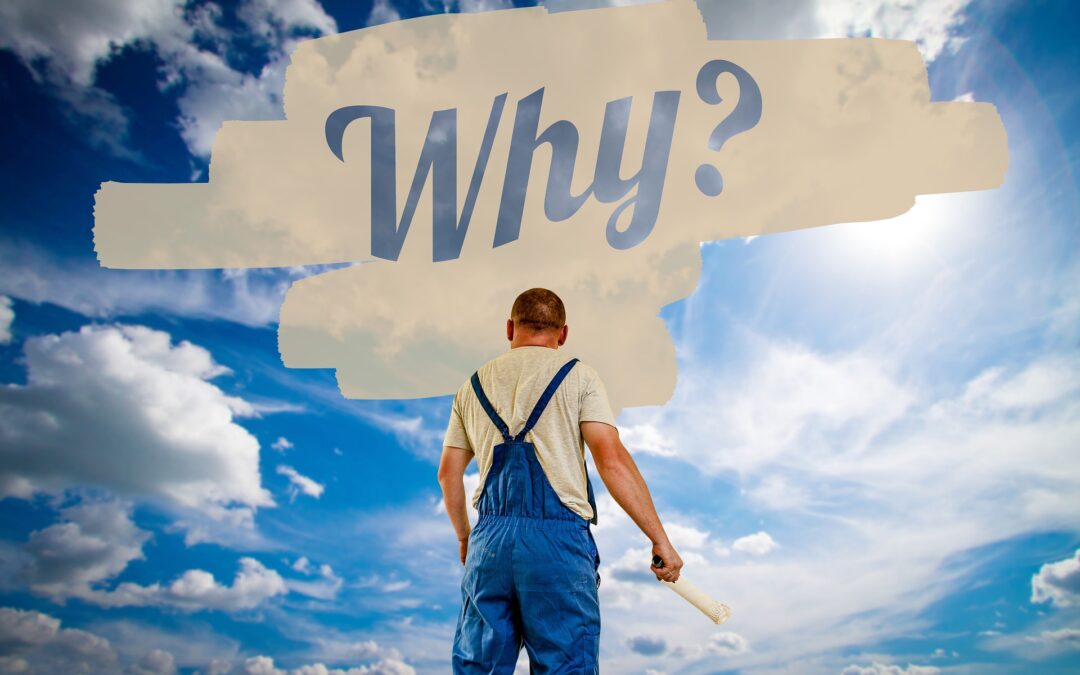 I have many clients with anxiety or depression who are on the endless search for why things are as they are. Why is my partner not loving? Why did my parents abuse me? Why did I not get the promotion? Why are those people picking on me?Why have I not yet met someone? And the list goes on. I am going to explain how ‘why’ is a useless question in terms of getting off that merry-go-round of self-limiting beliefs. You can spend your life down the rabbit hole of ‘why’, but you are only ever reflecting on your own assumptions.

Joe’s story – why is a useless question

Joe is a busy merchandiser who has spent decades in high pressure, sales-based roles. But the pressure isn’t the problem. In fact, he is a star performer. The problem for Joe is a niggling feeling of being overlooked at work, even though he is in fact the manager of a large team, and so it is clear that his bosses found him worthy of the responsibilities that go with his title. So you see, how Joe feels is very different to what is actually going on. In truth, Joe only feels accepted by the team he manages. He feels essentially rejected by anyone at an equal or higher status than himself. He has been asking himself why, for a very long time.

Joe also has awareness that his upbringing made him feel the same way, that for some reason, he feels that he was not valued as much as his siblings and that he feels as though his parents did not accept him. In this case, Joe has been asking himself ‘why’ since he was a child.

I pointed out to Joe that if a clever man such as himself could not answer that ‘why’ question after all these years, then maybe it is the wrong question. ‘Why’ is a useless question because it doesn’t improve the situation; and because it assumes that you can know what is in someone’ else’s mind, which you cannot. Even when you know someone very well, you do not know what they were experiencing at that time when they acted or behaved in that way. It is literally useless.

But asking ‘what’, or ‘how’ is far more productive. If Joe feels rejected, he could explore ‘how’ he feels rejected, or ‘what’ it is that makes him feel rejected. This draws Joe’s attention to the details that determine his emotional response. These are the things Joe can know, rather than assume.

If Joe was exploring his work scenario where he feels that he is not accepted by his peers or bosses, he might examine ‘how’ he reacts or ‘what’ it is about the interaction that causes him to react this way. Then he has the opportunity to attend to it. ‘Why’ is a useless question here because it implies that we have insight into others’ motives, beliefs, communication style, values, temperament and so on, and in fact, we can only hypothesise here.

Anyone teaching a class will know that no matter how clear you are in your instruction as the teacher, there will always be one student or more than one who has misinterpreted your directions. Everyone has a filter, and some filters are denser than others, no pun intended. In some cases, it is almost like speaking different languages. I’m sure you’ve experienced the feeling that some people ‘get you’, and others don’t. Asking ‘why’ is useless with the student who doesn’t get you, because they simply heard your instructions in a different way, through their own filter.

Even if there was a peer at Joe’s work who disliked Joe and who deliberately gave him the ‘shoulder’ to cause him to feel rejected, asking ‘why’ is a useless question, still. ‘Why’ is unproductive. After all, does it really matter? Or is it more important to focus on ‘how’ this scenario was created and ‘what’ Joe can do about it?

Sure, Joe’s feelings at work could very well be to do with his upbringing where Joe first learnt the pattern of not fitting in. But again, asking ‘why’ is a useless question because it assumes that he can understand and figure out the whole mindset – historical, contextual, experiential, biological, emotional, mental, spiritual, and so on – of the person Joe feels rejected by. Joe cannot assume this mindset because it doesn’t belong to him. He can only guess. He could spend several more decades trying to work it out, or he could get on with what he can safely know, being his own mindset, and explore his options for improving the situation that way.

And another thing about ‘why’

The ‘why’ question hasn’t even helped with Joe’s self-awareness. In fact, it has probably limited his self-awareness to some degree because it sets up an endless well of unanswered questions, which only serve to drain emotional energy, and a lot of time. If you want to feel even more anxious or depressed, keep asking ‘why’.

Asking ‘why’ is more useful in a court of law where intent is examined as part of a criminal sentencing. But even here, ‘how’ will be more productive in proving it, then ‘why’ actually becomes a point of assumed knowledge, around the facts. In this example, it is by looking at ‘how’ that the ‘why’ will be addressed. Focusing on ‘how’ or ‘what’ is not only more logical, but more productive.

You can spend your life down the rabbit hole of ‘why’, but you are only ever reflecting on your own assumptions. Because of that, you can never escape yourself. Ask ‘how’, or ‘what’, and free yourself from that endless spiral of entrapment that only makes more room for blame, self-doubt and self-recrimination. There are better ways to live.